The journey is just beginning - but let’s recognize a milestone when it happens; on June 24th at 11:30AM Pacific time, I passed my official FAA checkride and was issued my Private Pilot certificate with Airplane Single-Engine Land (ASEL) rating.

This, after thousands of miles flown in twelve different aircraft across nearly sixty individual flights, eight instructors, hundreds of landings at a dozen different airports day and night, countless unbookable hours in my home simulator, endless tests and a lot of swearing at western Washington’s finicky weather in all four seasons.

Any good trip is worth a debrief - so let’s talk about it. Specifically through the lens of a prospective student who wants to go the same route - what should they know that I wish I knew when I started?

What Did It Take to Achieve?

Probably the big question from any prospective pilot is “what am I getting myself into?”

You’re going to care about:

And – you’ll find a million articles about this everywhere else on the web, so here’s what I can uniquely offer you.

A spreadsheet. Here’s the link for you to explore it yourself, analysis and screenshots below.

What it cost me in money and time 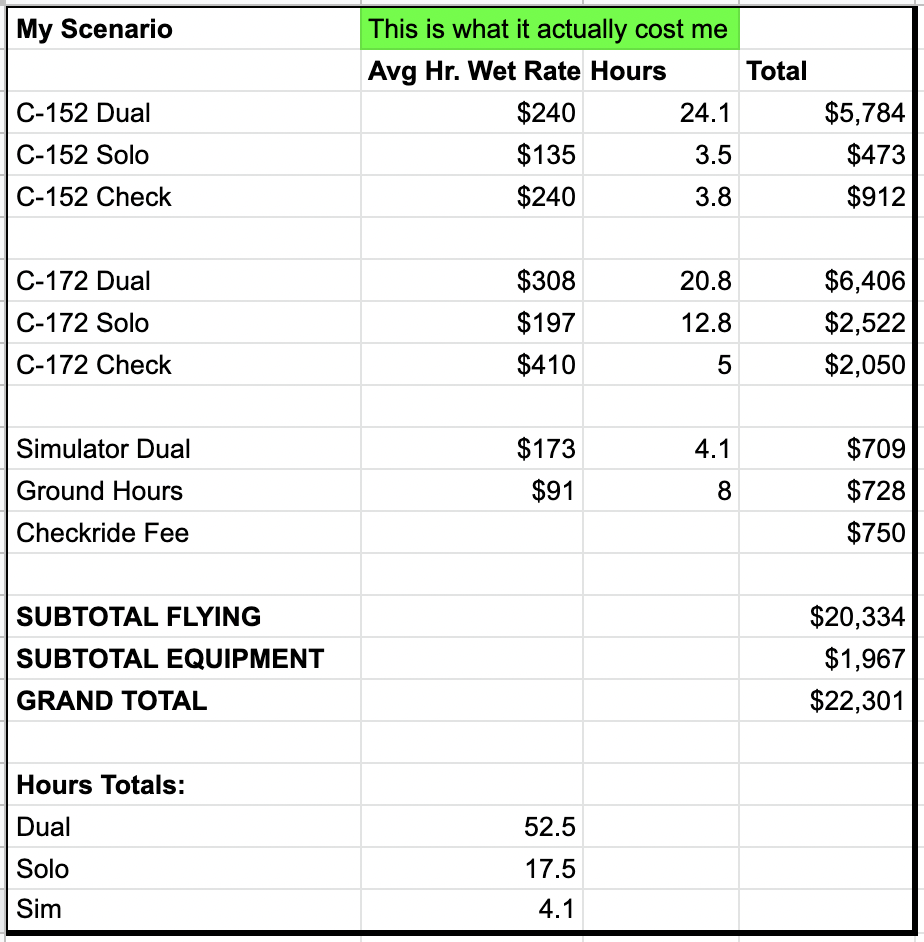 Split into three “stages” along the path, it took me the following time and money to achieve each:

Can you do it cheaper and faster? Probably.

Let’s add on two hypothetical scenarios and compare to my actuals:

Here are my findings on these scenarios:

Be aware: some of what you spend, especially on hours, won’t be entirely up to you. Your CFIs at your school are the ultimate arbiters of whether you’re allowed to progress, ready for your checkride and so on, so the number of hours you build have a practical minimum: what it takes to convince them you’re ready.

What I was told about hours when I started my journey mostly came true in the end:

Where you land, between the mythical 40, and the more realistic 80, is going to drive your PPL cost more than anything else.

The good news is you can spread it over an number of months, taking lessons and building hours only when you want to spend the money. The stages came out to be pretty evenly priced for me, and likely will be for you, too.

I suspect there’s a very special someone out there that wants to get their PPL for under $10,000 these days and can probably do it. But to be a contrarian, I think there’s a lot of sacrifice that’ll be tied up in that number and it may not be the best thing to optimize for. Quality of training, number of hours to build experience, dual vs solo time, building up equipment you’ll continue to use - these are all things that might get put aside to chase a cheap PPL, and I’m personally glad I didn’t go that way.

This is a category of question I was dying to know when I started. “Where did you get stuck?” is something I asked a lot of my pilot friends. I should have also asked “what was a breeze?”

I’ll start with what could have been hard but made easier: It’s been a grind to get my PPL training done while in the middle of a full-time job. If you’ve got a job, be sure you go to a part 61 school. The curriculum is more fluid and you can take lessons out-of-order. A 141 school may seem attractive due to fewer overall required hours but it’s not worth it if your time isn’t completely your own.

Next - here are particular difficulties you are going to want to build in some time and planning for:

If this happens to you, remember:

“Aviate, then Navigate, then Communicate. You'll be okay!”

Was there anything easier than I expected? Yes indeed, this can happen, and it did for me in a few places:

You’ll have your own moments where things just “click”, and that will give you energy to get past the hard moments that will come.

How Was the Checkride?

There’s a lot of pent-up worry about how the eventual day with the DPE will be. Will the checkride be fun? Scary? A tale of tragedy?

Okay, maybe that was just me. But the fear was real. In my own mind I pumped up the fear of a crabby chief pilot from hell, putting me on my back foot every moment, making me feel completely unprepared to be a pilot. Maybe this worked in my favor - I put a lot of pressure on myself to ace my pre-checkride stage checks, and not wait to test myself until the end.

But still - the day came. And here’s what you should know about it:

By the time you get to your checkride, you are (or should be) a confident early-stage private pilot. You’ve been through the tests. You have the hours. You have the backing of your school. As the pilot in command it’s your job to take your examiner up and give them a pleasant, professional ride, and you should know whether you can do that.

I walked out onto that ramp feeling confident and ready to go, remembering the best quote I heard about the checkride:

“Your examiner is just your first passenger as a private pilot.”

So - a nearly year-long journey is at an end, and a new one is beginning: learning more on my own than with an instructor in the seat. Remember, you don’t have magic skills that appear when you finally pass that checkride. You come out of that checkride with the same experience you went in (your examiner can’t teach you anything, remember?). So don’t get cocky - remember most of your job as an early private pilot is to learn more, safely.

And - have a good time doing it. It’s flying, after all.

The Final Lesson - Be Prepared

I’m not new to flying. I feel like I’ve prepared my whole life for the journey to being a pilot. From early days learning flying from my father, to the early simulators, to Space Camp, flying has been around me and waiting for me to come back.

But coming into flight training at 40 years old, I brought an experienced, systematic approach to learning that I’ve built up over decades, that I think served me well. It’s just three simple rules:

I know I did it right. I did the interviews. I built the plan. I tracked my progress and work-ons.

And – I doubled my commitment by making flying - and simming - a whole thing, right here on this website, making myself accountable to those minimum commitments, among my family, friends, and suscribers.

Life intervened. It wasn’t perfect. But I did it - I’m a pilot.