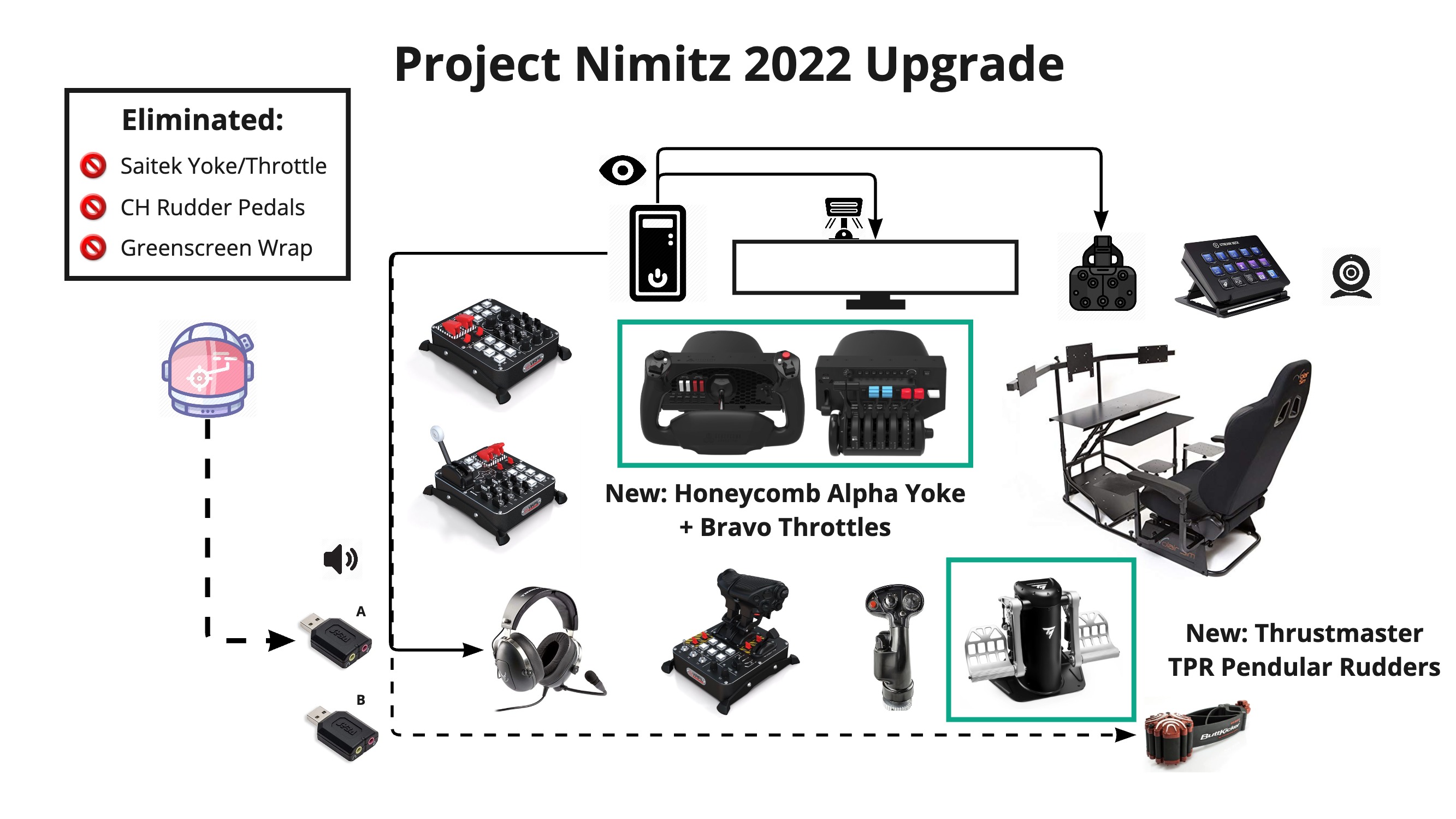 Nimitz is an ongoing hardware and software project to provide immersive flight simulator experiences at an affordable price in a home computer setting.

See It: Watch Nimitz in action in this Tomcat Landing Video.

Read About It: Read the original Nimitz Spec from January 2019.

The Core: The heart of Nimitz is an Alienware Aurora R8 with an Intel i7-9700k CPU, 32MB RAM and an Nvidia RTX 2070 GPU. No GPU upgrades are possible due to power supply limitations - and the specific difficulty of installing a beefier power supply in an R8.

The Seat: Equally critical to Nimitz is the seat - the Volair Sim Flight Cockpit. This solution provides mounting for all controls as well as the Samsung ultrawide monitor for a wide field of view. The seat itself is adjustable for different heights and has a space to mount the Buttkicker haptic unit - see the blog post for instructions.

Additional components are discussed in detail, categorized below.

The VR Option - Valve Index: One way to get visuals is with the Valve Index; the RTX 2070 GPU puts out enough pixels to run DCS World or X-Plane 11 simulations at 60Hz stereoscopic, as long as you keep to lower detail modes. The Index knuckles controllers aren’t a factor - it’s better to stick with the HOTAS controls.

The IR Option - Ultrawide Monitor and TrackIR: A more common scenario is to watch the action on the Samsung CHG90 curved ultrawide monitor at 3840x1080, a mode supported natively on both DCS World and X-Plane 11. Head-tracking is accomplished using a NaturalPoint TrackIR5, with the receiver mounted above the central monitor, and a TrackClip Pro transmitter mounted to the headset.

An input addition, suggested by StingTV’s Home VR Cockpit Tour, is a side-mounted trackball that can be easily indexed and used for mouse movements and clicking, even when in VR.

The Rumble Seat: A ButtKicker Gamer2 unit turns low-frequency sound into rumble effects. The Volair Sim seat has a mounting point for the rumble device. However, it’s not quite as simple as plugging it into the sound card. Here’s why.

Getting the Right FX: There are two problems to solve about rumble. The first is splitting the audio signal to keep a stereo audio signal for headphones while also piping it to the transducer - which is a problem with the Aurora series due to its Alienware Audio software. The second problem is isolating out just the signals you want to be translated into rumble, and not just every effect that happens to have a low-frequency component (think about someone calling you over the radio, and it shaking your seat in time to their voice. Creepy.)

Both problems can be solved through the application of inexpensive hardware plus software: a tiny USB external sound card (buy two - I’ll explain why in a moment), and software called SimShaker for Aviators that exports just key game events as rumble sounds. This guide on 476vFighterGroup was an excellent reference to show how to configure the USB sound card and SimShaker for Aviators together to get a great effect.

Clean Up the Sound with a Second USB: A second USB sound card isn’t a must-have, but it is a significant quality-of-life improvement for audio. The Aurora R8’s onboard sound card suffers from significant electromagnetic interference, which gets worse at high CPU/GPU usage - like during a flight sim. Noticeable audio artifacts are heard when plugged into the front audio jacks. The solution - a second USB sound card. The interference is completely eliminated with an $8 purchase.

VoiceAttack, VIACOM Pro, and SRS: To provide additional utility during flight without the need for more switches, Nimitz uses VoiceAttack voice command software with the VAICOM Pro addon for DCS World, including the Chatter pack for immersion and the AIRIO add-on for hands-free voice control of Jester, the AI-controlled RIO in the F-14 Tomcat. When flying in multiplayer servers in DCS World, Nimitz uses SimpleRadioStandalone - SRS to tie voice communication into DCS’s radio simulation.

Project Tusk Helmet: For added realism I modified a vintage US Navy flight helmet with modern audio components as an alternative way to experience combat flight simulations. The Track IR can switch over from the headset by means of velcro, and via a Razer USB Audio Enhancer with dual audio jack inputs, I can switch between a boom microphone and the oxygen mask microphone. Project Tusk has its own whole section on my website for the curious!

Elgato Stream Deck: I’ve been getting more and more involved with the streamer community, and having quick access to key A/V controls without having to switch away from the sim has been a great help. I love this little gadget, it’s thoughtfully designed, the software configuration is easy, and it has a lot of community support.

TM Warthog Flight Stick: At the heart of all military - and some civil - flight simming is the HOTAS: short for Hands-On Throttle And Stick, it refers to the stick and throttle combination that provides the range of motion needed for all the stick-and-throttle work a pilot needs to do to fly, as well as enough switches to make common auxiliary controls (flaps, gear and brakes, weapons, radar, radio) easy to reach and available to muscle memory.

The original A-10 modeled stick is useful for many aircraft, but Nimitz uses two optional replacement sticks depending on the aircraft: for the F/A-18C Hornet and AV-8B Harrier, Nimitz uses the TM F/A-18C Hornet HOTAS Add-On Grip, and for the F-14B Tomcat, the Virpil VPC VFX Grip - although this last one didn’t play well on the Thrustmaster base, and required buying a Virpil WarBRD base instead.

VIRPIL VPC MongoosT-50CM3 Throttle: Originally, I used the Thrustmaster Warthog HOTAS Throttle, but the throttle has been replaced by the VPC MongoosT-50CM3 Throttle. Overall, VIRPIL wins on available buttons and inputs, detent choices, and hand feel. The CM3 is a real step forward in sim throttles, and the VIRPIL configuration software, despite being a bit cumbersome, really does give a lot of optionality.

Thrustmaster TPR Rudder System: A new 2022 addition, the TPR Rudder System provides precise rudder control and nosewheel steering with differential toe braking. Often overlooked, a good set of rudder pedals is key to immersion - and necessary when upgrading to the higher-tier sticks and yokes, as they have no rudder input ability.

Honeycomb Yoke and Throttle: One of the newer entrants on the civil flight sim hardware market, the Honeycomb Alpha Flight Yoke is a sturdy yoke with a good amount of rubber and metal components to bring up the structural heft, a good amount of smooth deflection on all axes, and a variety of switches. It’s a high quality upgrade from the Saitek Yoke. The Honeycomb Bravo Throttle brings the ability to hook in six analog handles in a variety of combinations of throttle, mixture, pitch, and spoilers. Prop and jet handles are included. A gear lever, trim wheel, autopilot controls, a set of two-position switches, and an annunciator panel round out this very full-featured package.

These components used to be a part of Nimitz, but for one reason or another, aren’t here anymore.

❌ Philips Hue Sync: The original Nimitz installation was in a very small space with a white wall right behind the monitor. Hue Sync did a great job blending color into that wall based on what’s going on in the flight simulator. The wall seemed to disappear - it was a subtle but valuable effect. Nimitz is now in a home with more space and no white wall. The effect doesn’t work. The Hue lighting system still exists - it’s just part of my home office now, and not tied to the flight simulators via Sync.

❌ Saitek Avionics Panels: For further immersion in the civil flight world, Nimitz had three Saitek panels mounted above and to either side of the yoke: the Saitek Switch Panel, the Multi Panel, and the Radio Panel. While they were good practice for dialing up data in civil flight sim, they suffered from a few drawbacks - not compatible with the new MS Flight Simulator, and DCS Panels, the community project to allow use of the panels in DCS World, had performance issues. Last, they aren’t as useful in VR, since you can’t see the real world in front of you while in VR, so the repeaters don’t do any good. Overall, they just weren’t worth the power draw anymore.

❌ Cougar MFDs: Experimentation has been done with attaching the Thrustmaster Cougar MFDs for easy interfacing with military craft that use MFD panels (F/A-18C, AV-8B, upcoming F-16), but space considerations and inability to use accurately in VR has made continued usage impractical. These have been removed from Nimitz.

❌ CH Rudder Pedals: One of the longest-serving components of the Nimitz journey, which started years ago in early flight-simming days, the CH Pro Pedals were removed in 2022 and replaced with the Thrustmaster TPR Pendular Rudder System. No knock against the CH’s, which are still serviceable to this day and a great performer - it was just time.

❌ Saitek Pro Flight Yoke System: The Saitek Pro Flight Yoke System provided the standard pitch and roll, along with a three-axis throttle quadrant for throttle, mixture and prop pitch controls. It was removed in 2022 to upgrade to the Honeycomb Alpha Yoke and Bravo Throttle Quadrant. Like the CH rudders, they didn’t fail. It was time for an upgrade.

❌ Green-Screen Wrap: A stylistic choice, green-screens are take or leave unless you’re really trying to hide your background. In 2022 I moved Nimitz into a new dedicated space so there was nothing to hide; no green-screen necessary.

The Future of Nimitz

There are a number of possibilities for expansion on Nimitz, each exploring different potential for immersion:

Helicopter Controls: The announcement of the VIRPIL VPC Rotor series and the development of the AH-64 and Mi-24 helicopters for DCS is an intriguing possibility for Nimitz to expand to helicopter flight. For now, I can use the split-throttle function on the VIRPIL Throttle to control throttle and collective input, I just invert the axis.

VR Hands and Haptics: Infrared/ToF depth tracking of fingers or the use of haptic gloves could provide a way to flip virtual switches without the need for mouse and keyboard, or physical switches.

Airframe Buildouts: A variety of enclosures could be made that mimic the airframe around the cockpit, for more of a real feel. Often these panels are airframe specific, so builds must either be made generic or panels made removable for switching out.

Overhead Switchbox: For a bit of a science-fiction feel, I envision having switch boxes mounted above the pilot’s head. This would require some type of mounting gantry, which would be a build challenge.

Movement Platforms: Mounting Nimitz on a moving platform can provide physical feedback in a whole new way. Affordability is still an issue, but six degrees-of-freedom (6DOF) units like GForceFactory’s Edge 6DOF are beginning to approach levels of consumer affordability.

External Reprojection: Traditional ‘sim dome’ multiprojector curved setups are now almost fully obsolete thanks to VR. However, if the IR+Monitor option is still going to be useful in future, an upgrade could be a projector that reprojects areas beyond the screen onto a wall beyond the unit, in order to give an even wider peripheral field of view.

Wingman/RIO Station: A second Nimitz unit - or a modified, simpler flight sim portable unit - could be paired up with Nimitz to provide multi-crew capabilities in the same room.