Flying the Virtual Skies is an episodic video series presented by The Museum of Flight, developed by Charles Cox and the Future Leaders Team. It combines modern flight simulation with real expert interviews, to give viewers a unique “being there” experience on historic aircraft. Using lessons learned in the GiveBig 2020 Livestream, this series continues the Future Leaders’ commitment to exploring new audiences and supporting Museum development.

The following episodes of Flying the Virtual Skies are available to watch:

Our Support and Sponsors

We are grateful to The Museum of Flight for giving us the opportunity to innovate as the Future Leaders Team, and for their trust and partnership with us as we developed this unique programming to help drive the Museum’s aviation excitement into the digital world during the Covid-19 crisis.

How and Why Was This Produced?

The Future Leaders Team exists to support The Museum of Flight with development, outreach and new audience efforts, focusing on young professionals. In early 2020, the Covid-19 crisis had forced the Museum to shut its doors to the public and refocus its efforts virtually. The Future Leaders Team built this new type of programming as a pilot to reach enthusiast audiences without the need for a physical Museum presence.

The development of Flying the Virtual Skies builds off lessons learned in the GiveBig 2020 Livestream presented earlier in 2020. The key question: Can a compelling, Museum-worthy flight simulator experience be delivered in a 45-minute show?

Here are the principles we tried to stick to:

Idea generation started in June 2020, about a month after GiveBIG. An early frontrunner was the Aérospatiale/BAC Concorde - a favorite at The Museum of Flight, whose own Concorde G-BOAG, was delivered by Captain Mike Bannister in 2003, at the retirement of the Concorde program.

The Phil Collins Concorde flight - can you really beat the time zones (and race the sunset) back across the Atlantic from UK to US to get Phil to the concert stage in time to do his show in two places?

From idea to landing a timeslot took about two and a half months. By September, based on the success of GiveBIG 2020, we were able to schedule a timeslot with The Museum of Flight for the show on November 21st, 2020.

We had about ten weeks to deliver.

The Simulator and Airplane

As with previous shows such as GiveBig 2020, Charles’ Project Nimitz flight simulator hardware would be used, powering a copy of X-Plane 11 Pro, with the X-Vision plugin, XCamera, and a host of other smaller add-ons. At the center of the flight would be the Concorde itself, simulated by the Colimata Concorde FXP.

The route was originally based on the historical route of BA 003, the “Phil Collins” flight from London Heathrow to JFK Airport in New York City.

Next was building out the two timelines - the timeline of the 45-minute show, based around the Flight Profile of the Concorde aircraft, and the calendar timeline of the physical show building and asset delivery, which needed to land the entire episode by November 21st for the final show date.

The phases were timed out from Charles’ practice runs, and any areas where compression was needed to hit the 45-minute mark were flagged.

The original plan was to use the pre-recorded segments to “hide” compression areas, allowing Charles to reset the simulator correctly while a pre-recorded video played to the livestream audience, when the video was complete, action would return to the simulator, now further along its route and ready for the next phase of flight.

The Guests Lead the Way - How the Show Changed

Guests are the most important part of Flying the Virtual Skies. With such an emblematic aircraft as Concorde, it was crucial to find guests that could speak to the aircraft’s legacy, technical specifications, feel of flying, and other topics of interest.

In early discussions on the show, the format, the audience and particular challenges of this type of show, we kept the following mantra in mind: Celebrate and Honor Concorde. It is a legendary aircraft, touched by both triumph and tragedy. We would treat it - and her crew - with great respect.

As information began to flow both ways, we shared artifacts like our schedule and our early practice videos. Our guests shared their own artifacts: charts, logs, checklists, and feedback about our practice sessions - many of which needed serious help.

To make things even more interesting, Mike and Ian were in the United Kingdom, GMT+0 timezone. We were in Seattle, GMT-8 timezone.

It became quickly apparent that several significant show changes were needed to be successful:

Fully live was not an option.

This was the most uprooting change, and forced an entirely new production pipeline to be developed. However, the reasons for this were sound: through review of our practice runs, our guests let us know how complex each phase of flight truly was, and how much the simulator would have to be reset at each phase to take into account everything that the crew did along the flight route. It was also discovered that many of the avionics system settings did not correctly save when saving a flight configuration (known as a “Situation” in X-Plane). These two factors combined meant that a fully live show risked far too many errors when reconfiguring between phases.

A co-pilot was required.

Not only was a solo pilot not historically accurate to Concorde, it was also not wise for a show about Concorde. Starting with the first guest reviews of Charles’ practice runs, Alec Lindsey, a fellow Future Leader, as well as an airline pilot and certified flight instructor, pitched in to help the show by putting together sim-ready checklists, vetting details with our guests, and accompanying Charles on his practice flights, running checklists and providing valuable feedback and cross-checking throughout procedures. The show rapidly became better, tighter, more precise, and it was clear that having Alec as co-pilot made for a better experience all around.

As said before, guests are at the heart of Flying the Virtual Skies. Mike and Ian brought so much of their own expertise, their own knowledge and personality to the show, an additional narrative conceit was no longer necessary - plus it added additional risk and fraying of focus. While it was regrettable to not be able to tell this particularly interesting historical story, the refocus on our guests was the right choice.

The reality was clear: we couldn’t manage the Concorde procedures, our guest interviews, and cueing up segments all in a live format without something going wrong. And with our guests and the reputation of this aircraft at stake, that wasn’t an option.

If we had separated live production pipelines where more than one person could handle each task - a pilot to fly, a host to interview, a producer to cue and manage the streams - it might have been a different outcome. However, in a pandemic where people aren’t able to congregate, each one of those roles then requires a signaling and coordination mechanism of some kind over the Internet, which imposes additional delay, complexity, and risk to all other parts of the show.

We had to decide where to spend our effort. What and how much did we want to re-invent?

Time remaining: Two and a half weeks until showtime.

We were fortunate to also get two other great people helping us, Jansen and Chelsea, who were going to develop one of our pre-recorded segments. The Museum’s own senior curator, Matthew Burchette, agreed to film a segment inside the actual Concorde at the Museum. We agreed to drop the third segment for simplicity’s sake.

We needed to reconfigure the original GiveBIG 2020 production pathway with the following mantra in mind: How could we create a pre-recorded show between guests in the US and the UK, that FELT live?

Here’s how it worked:

Click here for a PDF version of this beautiful thing

Here are the key technical findings and recommendations for anyone interested in doing a similar show:

Multi-track audio at ALL COSTS

I made a bet that much of the post-production difficulty would be lining up audio among these components:

If this was all one stream, it would be impossible to “Frankenstein” audio around as needed to overcome issues of timing, of overlapping, awkward silences, and more. Also, because Alec was co-piloting along live to my livestream, we expected there’d be a stream delay in his responses that we’d have to time shift backward. That wouldn’t have been possible with a single audio stream.

It took a significant effort to capture all audio tracks separately, and it was worth it. Techniques used: 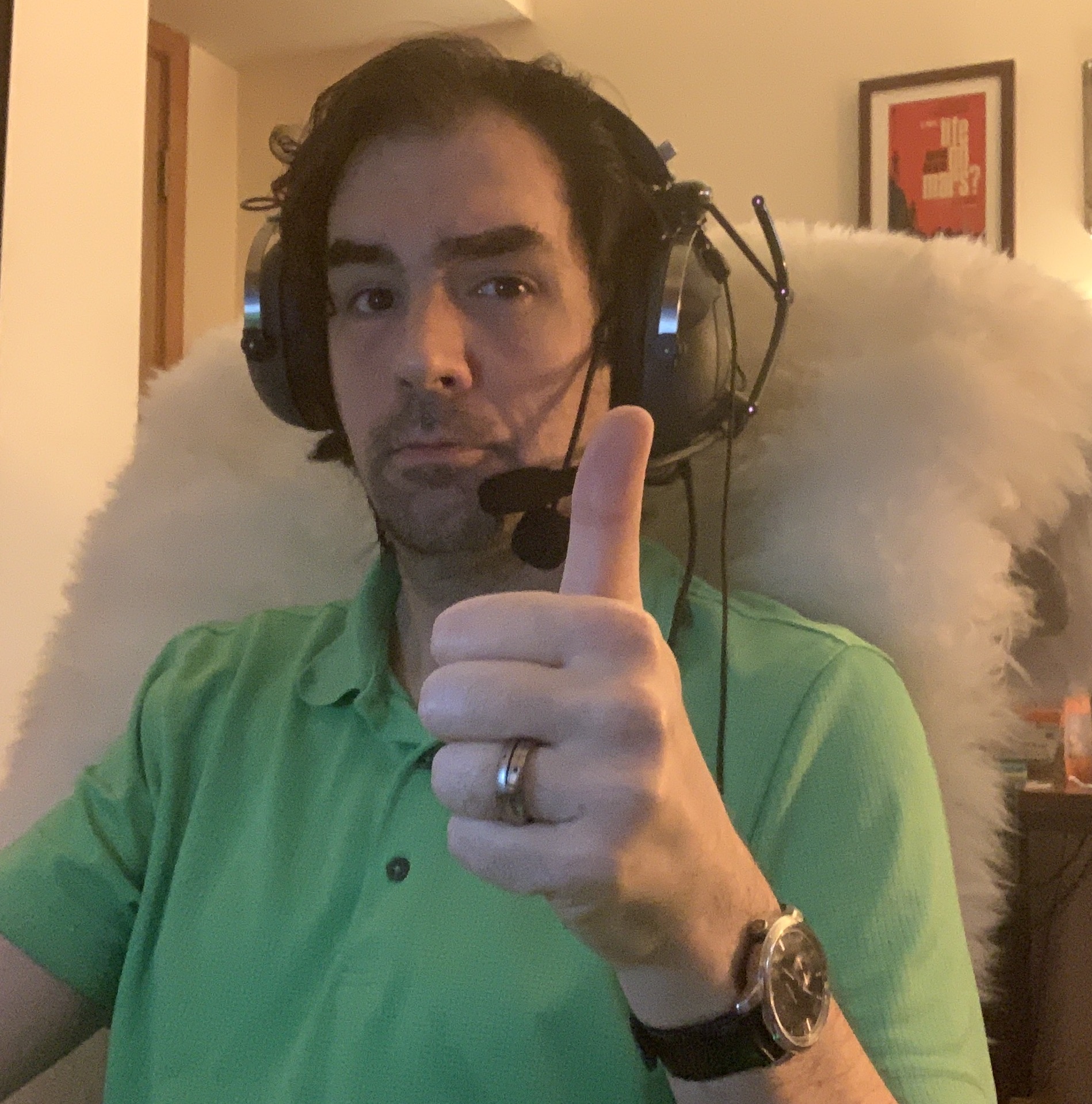 Pictured: The Project Nimitz USAF Thrustmaster Headset and the Project Tusk Razer Ifrit, layered one over the other.

Both Alec and our guests needed to be able to watch footage (in Alec’s case, live, and in our guest’s case, pre-recorded) and comment.

For this, YouTube livestreaming in Ultra-Low-Latency mode, with an Unlisted link, worked fine. Overall we saw delays of between 3 and 7 seconds with both parties on the West Coast US. As mentioned above, since we captured all audio tracks separately, it was not overly difficult to simply time shift out the delay and make it sound very close to live. 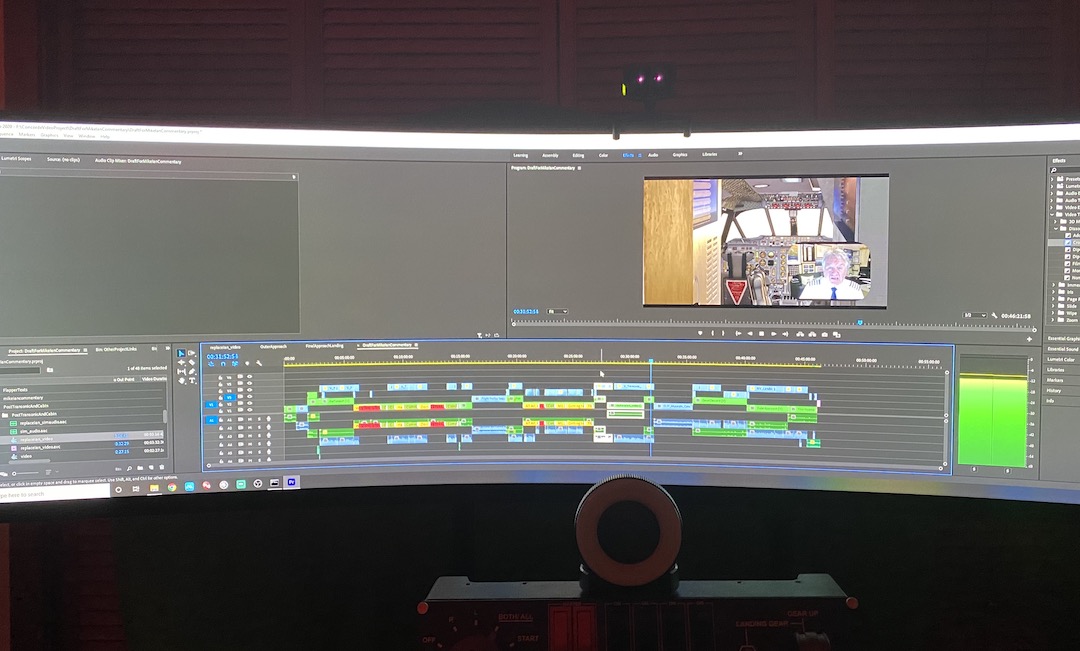 A grab-bag of tips here:

We worked drafts until the final day before showtime. Draft five was the final draft. At that point, things had stopped moving on the timeline. I’d purposely left mastering until the end. We ended up cutting a lot of mine and Alec’s audio to give more time and attention to our guests, and it was the right choice. Our guests came through clearly, their stories and experience were front and center, and by talking less, Alec and I came off looking even more professional. We were just here to fly your plane, gentlemen.

In order to live-stream the produced output and allow our guests to take Live Q&A after the show seamlessly, the Museum used a tool called Streamyard. Overall the tool did what it was supposed to, but in playing back the show footage we had provided, both audio and video from the simulator suffered significant compression effects, leaving the sim experience sub-par. Overall it was still a good show, but modern sims have so much detail it’s a shame to miss any of it. We’ll be experimenting with this and competing technologies to try to find a good balance between flexibility and fidelity.

We’re taking our own internal retrospective notes to try to make future episodes even better. I’d be interested to hear your thoughts on the final production. If you’d like to give me your thoughts, don’t hesitate to reach out to charles.cox@gmail.com and let me know.

It was a pleasure to be able to develop this show with our distinguished guests, and despite the challenges - or perhaps because of them - the production pipeline we built came out surprisingly robust. I’m proud of it, and proud of all our Future Leaders for continuing to innovate during this unprecedented time, in order to bring the magic of flight to our audiences. Thank you for all you do.