The GiveBIG 2020 Virtual Fly-In was a livestream event presented on Twitch on May 6th 2020, developed by Charles Cox and the Future Leaders Team; it raised $7000 for the Museum of Flight in a four-hour interactive flight simulator live show with special guests, giveaways, and a fleet of virtual pilots and air traffic controllers that flew in and around the Boeing Field area in Seattle, Washington, using flight simulators from their home computers, connected over the VATSIM network.

The official Thank You video for the GiveBIG 2020 livestream!

The Interviews from the GiveBIG livestream were a popular feature - we are proud to present them here:

Watch ‘Em All: You can view all the interviews in a playlist here.

For those that are ready to sit back and enjoy the full, unedited four hours of content, we’ve got that for you, too.

Be aware - there are no subtitles, no captions - this is the stream as it happened!

Our Support and Sponsors

This program wouldn’t have been possible without the help of our sponsors and supporters:

We are grateful to The Museum of Flight for giving us the opportunity to innovate as the Future Leaders Team, and for their trust and partnership with us as we developed this unique programming to help raise money during the Covid-19 crisis.

We thank our partner, VATSIM, and the VATSIM ZSEARTCC for putting together a great virtual fly-in at Boeing Field. Thank you to the air traffic managers, controllers, pilots, community members and the VATSIM Board of Governors for all of their support and partnership to make this day happen.

Our special thanks to our sponsors Alaska Airlines and Cirrus Aircraft, who provided giveaway prizes for our viewers, and shared our message far and wide with their networks to make this day truly memorable.

And thank you to GiveBIG and 501 Commons for an amazing giving platform that helped raise over $19 Million and over 49,000 community hours for Washington State charities in May 2020. We were honored to take part in the Day of Giving, and benefit the Museum.

How and Why Was This Produced?

The Future Leaders Team exists to support The Museum of Flight with development, outreach and new audience efforts, focusing on young professionals. In early 2020, the Covid-19 crisis had forced the Museum to shut its doors to the public and refocus its efforts virtually. The Future Leaders Team built this new type of programming as a pilot to reach enthusiast audiences without the need for a physical Museum presence.

Developing and debugging this new type of programming for the Museum was a technical and organizational challenge; it was worth it not only for the money raised, but the lessons learned and the new connection to the VATSIM virtual flight community, forged during the development of this livestream. 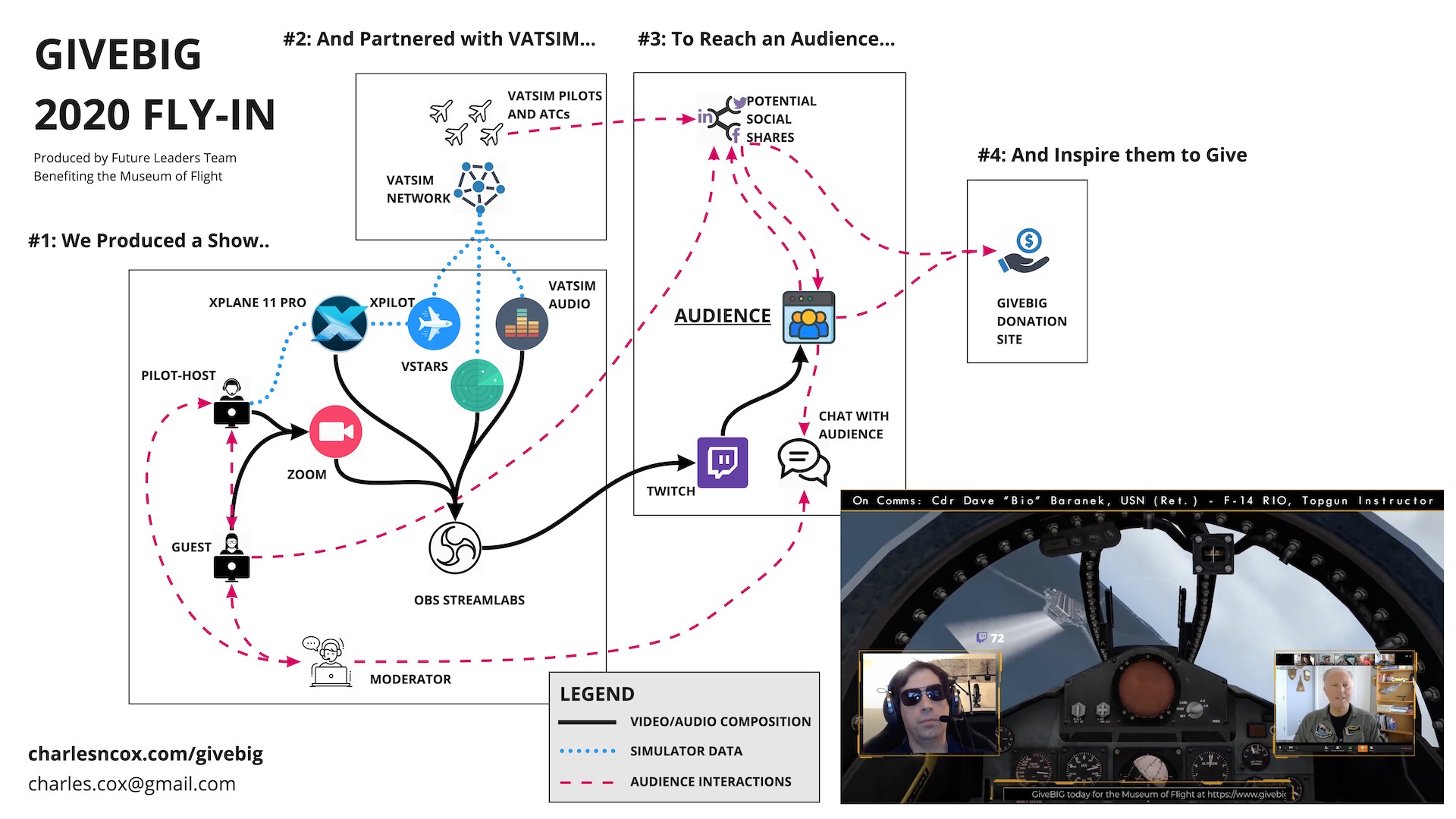 In segments of 30 minutes to an hour, the pilot-host (that is, the person flying), controls a live flight simulator and interacts with a guest, who views the flight simulator right along with the audience. The guest and pilot-host discusses a topic while flying, connected by voice and video chat through Zoom.

During the flight, Air Traffic Control (ATC) and other aircraft interacts with the pilot-host and guest in the simulator world over audio, connected through a multiplayer network called VATSIM. The pilot-host gives and receives radio calls to negotiate clearances, approaches and departures in the pattern of aircraft.

The flight sim, the VATSIM interactions, the pilot-host video and guest video are all mixed in real-time and broadcasted to Twitch, a live-streaming video service, where an audience views the stream in real time and interacts with the pilot-host and guest by text chat.

At intervals, the pilot-host and moderator remind the audience of the connection to the Museum of Flight, and post the link to the official GiveBIG donation site on the Twitch stream text chat and mention it on audio, in order to encourage donations. The moderator periodically checks the current donation amounts on the GiveBIG site and announces milestones to the audience, pilot-host, and guest, to celebrate donations and donors.

For this event, a single, very powerful desktop computer was responsible for the flight simulation, video conference, realtime composition and transmission to the Twitch livestreaming network. Due to the Covid-19 pandemic, having a second computer and a producer on site to help with livestreaming configuration was not possible.

The person flying, called the pilot-host in this pipeline, was also the interviewer of guests and controlled the switching of scenes in the streaming software, the tuning of audio levels, the hiding and showing of various sources, tasks traditionally controlled by a producer, but without co-locating the producer in the same location as the pilot-host, there is too much signaling difficulty to make the producer duties make sense as a separate role.

You can learn details about the flight sim hardware on the Project Nimitz page. While the computer is powerful, many modern computers, including laptops with modern graphics cards, can handle the combined load of flight simulators and streaming with no problems.

The simulator used was X-Plane 11 Pro, with the X-Vision plugin, XCamera, and a host of other smaller add-ons. The Washington state scenery was enhanced by TrueEarth Washington from OrbX, and Seattle scenery packs from Drzewiecki Design.

The mixing and production software was an all-in-one package called OBS Streamlabs. The graphics including transitions and wipes were a purchased template that made for an easy way to up the production value.

Used sparingly in the event, an additional tool called Foreflight, an Electronic Flight Bag program, ran on an iPad with an X-Plane simulator connection to pipe in simulator GPS data. Foreflight was visually “mirrored” from the iPad using a tool called APowerMirror, where it was captured by OBS Streamlabs and shown on the stream.

To truly elevate this event, we partnered with VATSIM and the ZSEARTCC region, to imagine an event with multiple aircraft in a single region, where the flight sim experience would feel more “full”, and the pilot-host and guests could contend with live Air Traffic Control operations for a sense of real flight.

The ZSEARTCC organization has had a long history of running live airport events with pilots from all over the world; the organization of the necessary air controllers and managers was completely in their hands - and they delivered a great event where our participation was less about having to nail down the details, and more about being a participant in their ATC network.

VATSIM also gave us access to the VSTARS air traffic controller simulator software, which gave us a real-time view of ATC operations during the event, for a change of scenery. You can see this software in action during the Aaron Schwartz VATSIM interview.

Normally, flight simulation is a solo affair, and the pilot has control over everything, from weather to time of day to failures on board.

However, since the VATSIM multiplayer network requires all pilots to share an experience, time and weather are locked to real-world conditions. This turned what would be an easy flight experience to a highly variable one, subject to the real-world weather that occured on the exact day and time of the live show.

In order to prepare for the challenges of live flight with real-world weather and ATC, in the variety of aircraft planned, the pilot-host worked with the moderator crew and VATSIM community managers in a series of eleven “workups” to work out the necessary departures and approaches, standard maneuvers, and all the bugs to work out in the streaming pipeline.

Check out the playlist of these workups to see the evolution of the streaming pipeline and procedures to ready for the final day.