Stage 2 of Galvin Flight training for my private pilot certification is well under way. I have 1.1 solo hours, 26.9 dual hours, and 80 landings so far. I’ve had my first taste of an IFR training “hood”, and have spent 2.2 hours in Galvin’s own One-G Cessna 172 G650 simulator. Winter weather has not been kind to my ability to get real flying hours here in the Pacfic Northwest - as I write this we’re under about five inches of snow in Seattle. Even if I could make it to Boeing Field, only one runway is operating, and it’s likely ground operations are hindered pretty severely.

For my dual instruction, I’ve moved to the Cessna 172. I’m sticking with the 152 for solos, but for weight and balance, you just can’t beat the 172’s “carry anything” power. I’m not a small guy, so to fly the 152 either I had to fly alone or have a very tiny instructor. 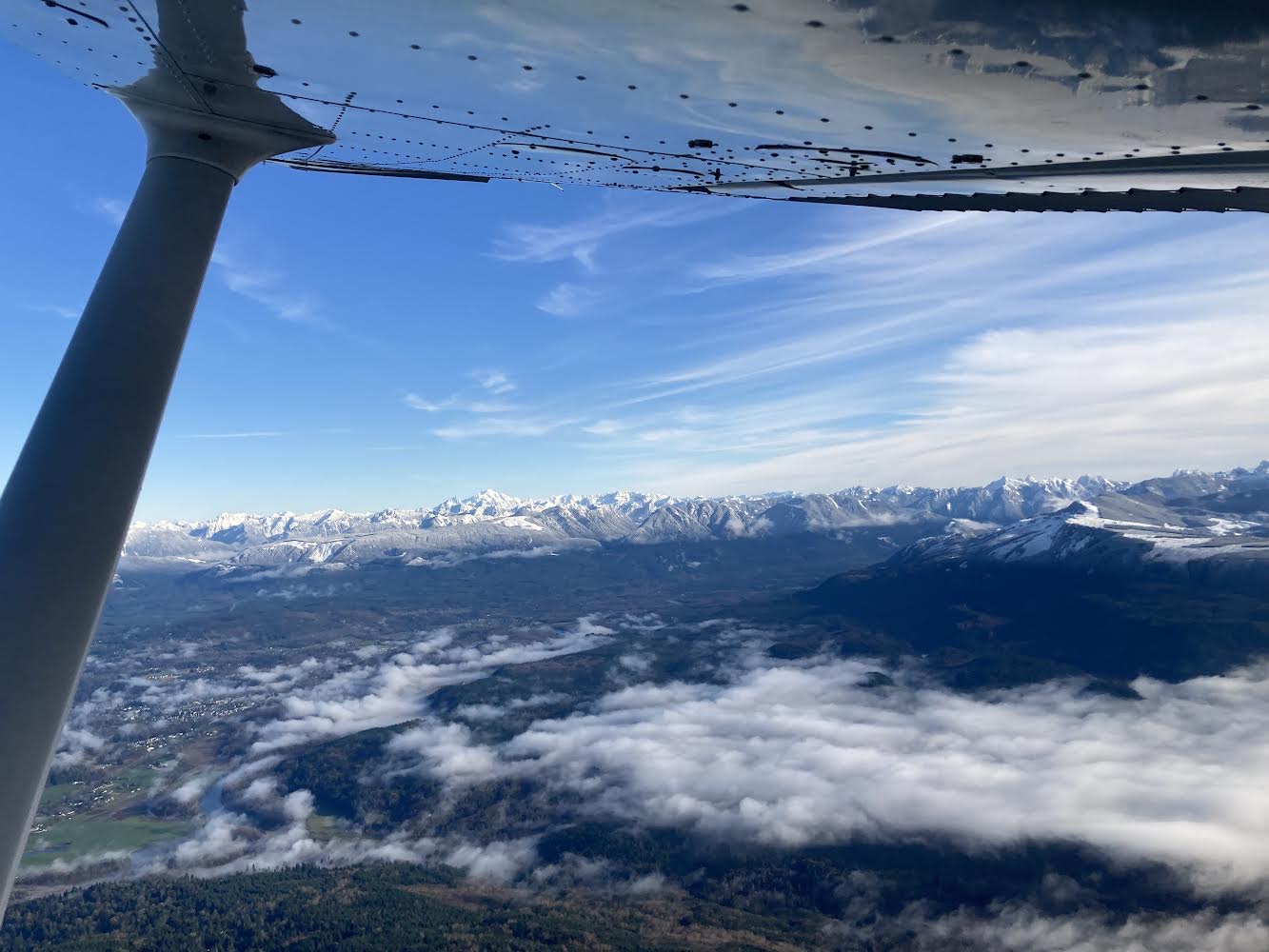 As the weather has gotten colder the clear days are beautiful and visibility is exceptional. Plus, engines love to eat cold air, we climb and move like lightning. In my most recent C172 flight I donned an IFR training hood and operated the plane via instruments only, through a series of maneuvers, including steep turns.

A milestone for Flight Sim Guy: I’ve now spent 2.2 hours in authorized flight training devices (simulators) that aren’t my Project Nimitz rig at home. Galvin Flight has a number of simulators on hand, I got to use the One-G G650 C172 Simulator for some pre-cross-country required training. 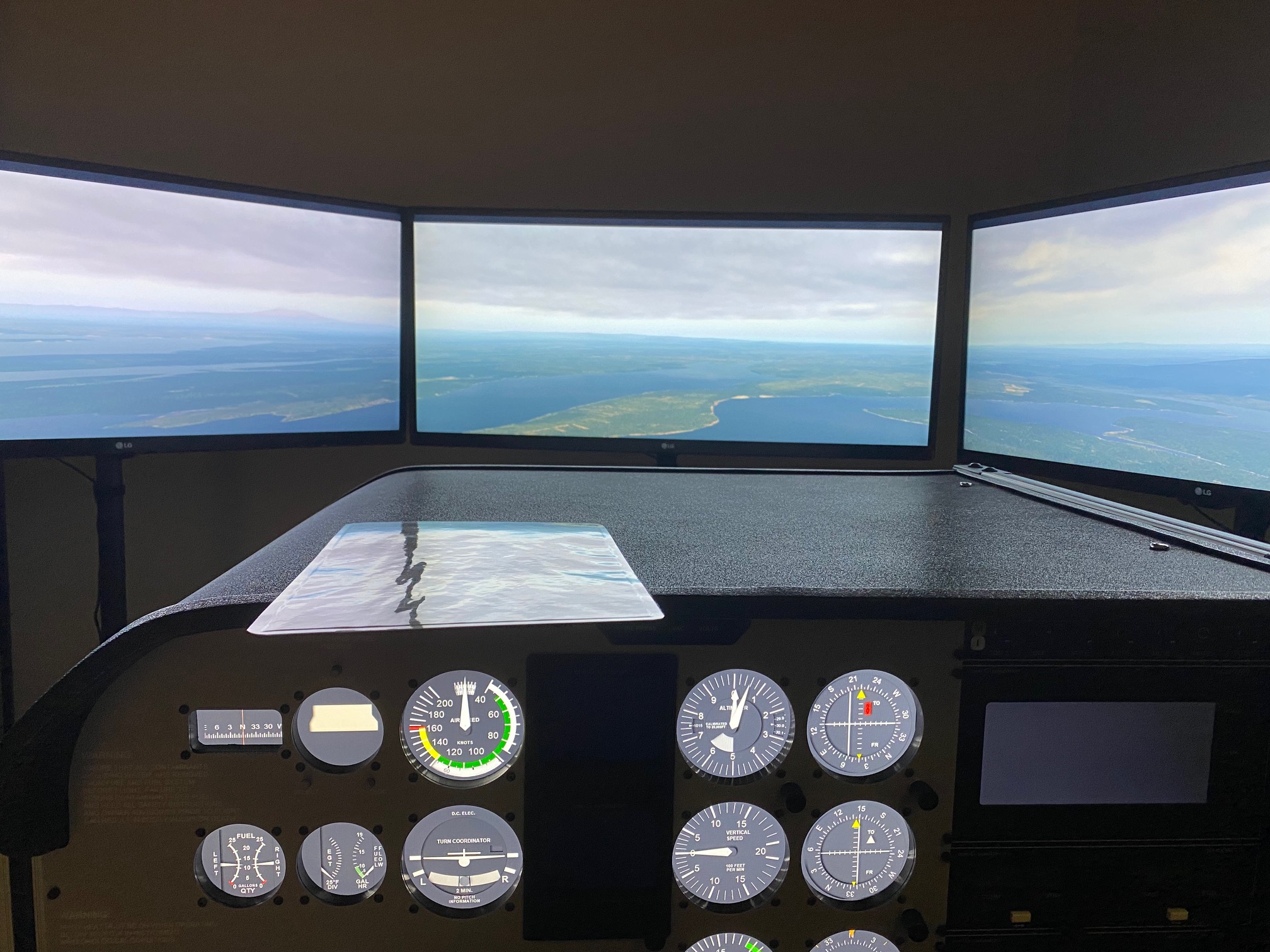 The G650 simulates a Cessna 172 with analog gauges as opposed to the G1000 variant. Rather than being “real” analog gauges, these are simulated with LCD screens that are then covered with round gauge housings. The effect works.

The yoke and pedals are sturdy, but the force feedback on the yoke is jarring, and ghost control inputs mean you have to correct at random times for inputs you didn’t make. The throttle is the friction-lock type and the mixture is the vernier type, just like the real deal.

The illusion breaks a bit at the screens. Best I can tell, the sim is a flavor of X-Plane, spread across three HD screens for maybe 90 to 110 degrees field of view. No head tracking or eye point change controls are used. It’s not a particularly beautiful version of the sim, but the big things (like Mt. Rainier) are where they should be.

The instructor controls the sim from a Chromebook and can modify weather, time of day, aircraft position in the world, levels of fuel, weight and balance, and induce failures.

Overall it’s an achievement to have a simulator that stands up to FAA certification as an Aviation Training Device - you can read the standards here, they’re not fooling around.

But is it useful?

I went into the simulator wondering the same thing. I had a vague sense that being a “sim guy” isn’t looked upon with any particular regard in the aviation world, so maybe these things just don’t really deliver much to real pilots.

Coming out of the sim after a few sessions, my finding is a little more nuanced than that.

For orientation/familiarization to an aircraft, and for scenario-based training especially in dangerous or emergency scenarios: Yes, a sim is useful.

For completing lessons at a flight school as part of their syllabus: Yes, a sim is useful (for some lessons).

For clocking hours toward your Private Pilot Certification? No, a sim is not useful.

That last item about the hours - I had a mistaken impression that I’d be able to get 5 of my required hours out of a sim, and made allowance in my plan for that. Two issues there: 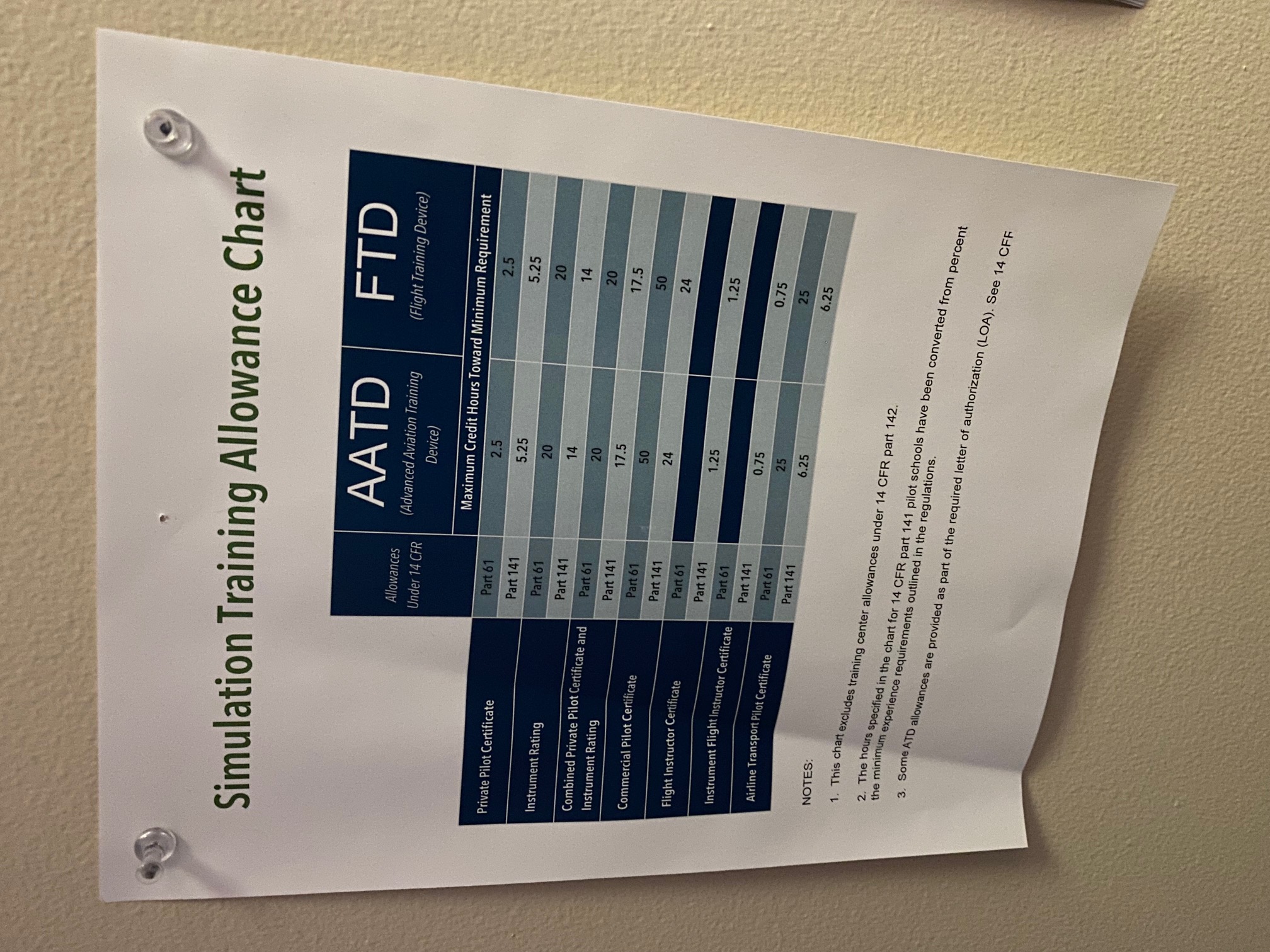 First, that 5 hours is only in a Part 141 school. In a Part 61 like I’m in, it drops to 2.5. Second, they’re only countable towards your overall dual hours, not anything “good” like instrument or night required hours. Takeoffs and landings don’t count toward your required amounts or to stay current. They also can’t be used toward a type rating.

What about home sims?

That was my next question. If the “official” sims don’t get you hours, why not just sim at home? Because the quality of training you’re going to get - the lessons your brain takes out of the experience - are only as good as the deliberate didactic efforts put in by the person providing the instruction.

If you sim at home, you’re simming alone.

If you sim at school, you’re simming with an instructor.

But I’m going to fly my sims at home either way, because I’m a nerd. So I’ve tried to split the difference by involving instructors in my sim flying - either live like in the Flying With Dad show, or, by making my YouTube recordings of my flights available after the fact to my instructors to review and provide feedback on.

Here’s an example of a pre-XC training I did in my home sim, using pilotage and dead reckoning (and no GPS!) to follow a planned VFR flight plan, hitting visual waypoints and timings.

And feedback works: My instructor had some words with me about my altitudes on that flight (it may have qualified as scud running - ahem); we had a mini-lesson about standard VFR altitudes eastbound and westbound right there and then. Lesson learned.

I can attest, nothing really compares to flying the real thing, but with school simulator usage, and thoughtful home simulator usage, you can reinforce good habits and more cheaply train your body and mind for challenging scenarios or emergencies that would be nearly impossible to safely train for in the real world.

But you’re only going to get your hours in real metal.

I’ve been snowlogged here in Seattle for the last few days and all my planned flight training is on hold. After the snow, I decided to see if Microsoft Flight Simulator’s famed real-world terrain data picked up the recent snowfall and would show me a winter wonderland around my own town.

I was pleasantly surprised!

Here’s hoping everyone stays safe and warm this winter - as I clock hours toward my cross countries I’ll share more learnings. I just need to be able to get to the airport.